Everybody loves Sour Patch Kids. How could you not? With an insanely sour initial bite and deliciously sweet finish, these candies are a wild flavor roller coaster. But have you ever peered inside your colorful bag of Sour Patch Kids and wondered, "Hmm, where did these little guys come from?". Well, I know we at Bulk Candy Store certainly have! So grab a few handfuls of the sour (but then sweet!) history of Sour Patch Kids!

Attention all my 70s babies! I'm sure you were involved with the space craze of your era, and whether you knew it or not, so were the businesses all around you. The early production of Sour Patch Kids took place in the late 1970s in Ontario, Canada, created by Frank Galatolie. These deliciously chewy treats were originally named Mars Men to keep up with the space craze during that time. Fittingly, the candies were shaped like martians. However, when the Cabbage Patch Kids Craze overtook the children of the 80s, Mars Men quickly became the iconic Sour Patch Kids, and the martians transformed into little children. Sour Patch Kids hit the U.S. market in 1985 and they quickly became a success. 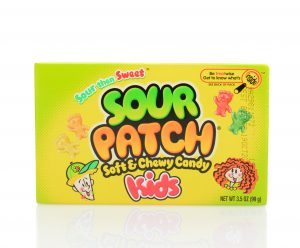 The first packages of Sour Patch Kids featured a blonde boy based off of Frank Galatolie's son, Scott, as the candy's mascot. Later, starting in 1992, the package featured a more modern-looking Scott with a baseball cap as well as a girl; both of the kids appear to be crazy for the candy. This box featured the older candy catchphrase "Sour then Sweet" which has transformed into "Sour.Sweet.Gone." in recent years. In 2010, the packaging ditched the boy and girl mascots in favor of the candy themselves, and they are now the official mascot of the candy. The little candies are displayed to be mischievous children both on the box and in commercials. However, in the commercials, their sweet side comes out after they are done being sour, reflecting the candy's flavor pattern. In 2013, blue raspberry was added to the original orange, cherry, lemon, and lime flavors. 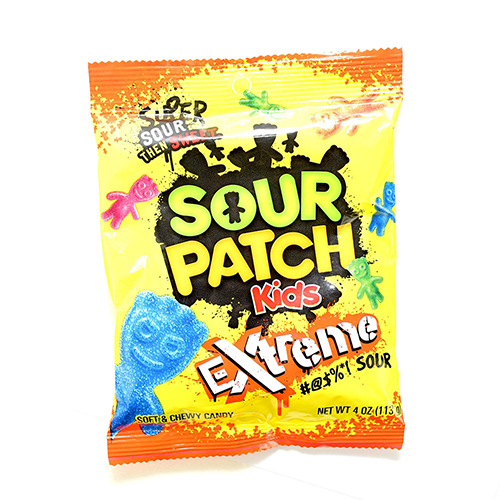 Love this delicious history of Sour Patch Kids? You can find out about the sweet histories of Sour Patch Kids and loads of other yummy candies at our History of Candy Tour located in our retail store! We'll take you through the honey of the ancient Egyptians to candies made today; you'll even see some crazy candy art along the way! So don't hesitate, come and join in the fun today!